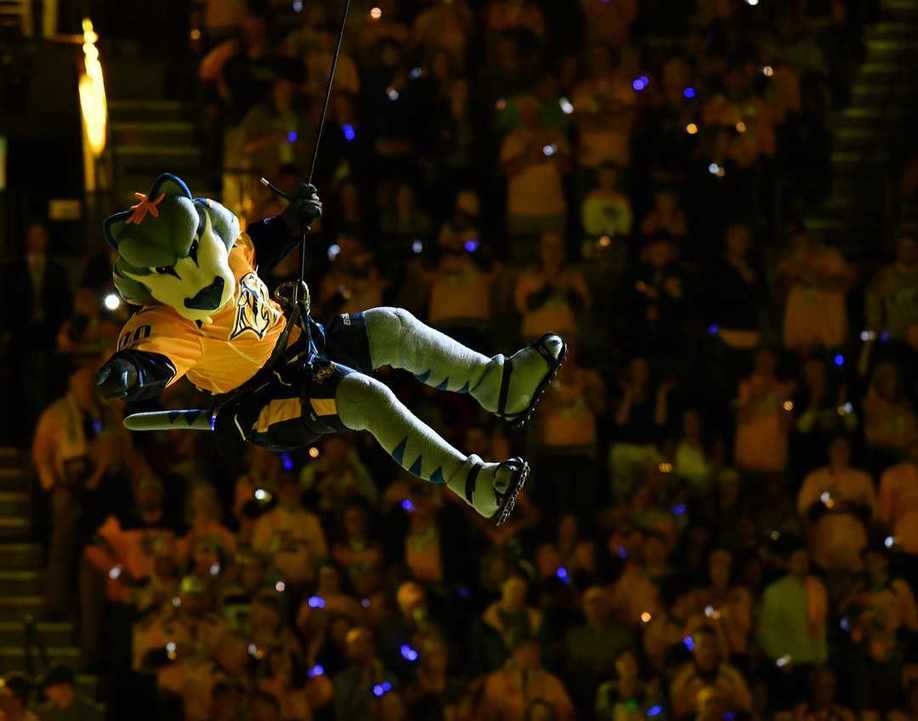 Predators have hilarious takeoff on Golden Knights’ pregame show USA TODAY Published 9:25 PM EDT Oct 30, 2018 During the expansion Vegas Golden Knights’ amazing run to the 2018 Stanley Cup Final, they had the NHL’s best, over-the-top pregame show. Nashville Predators mascot Gnash, shown in 2017, starred in a parody of the Vegas Golden Knights’ pregame show on Tuesday night. Christopher Hanewinckel, USA TODAY Sports A golden knight would battle various foes and as Vegas advanced through the playoffs, the pregame game show would become more intricate. Before the Western Conference final against the Winnipeg Jets, the knight split an on-ice projection of a jet in two. Kudos to the 2017 Western Conference champion Nashville Predators for coming up with the perfect parody before Tuesday night’s home game against the 2018 Western Conference champion. A likeness of the golden knight was on the ice standing before a sword in a stone and was booed as he touted his team as the best of the West. As he boasted, the Predators’ mascot, Gnash, rappelled to the ice behind him. Gnash landed, walked off, grabbed a guitar and knocked the knight to the ice with a hit from behind. No giant, Vegas-style choreographed battle, but it worked. Predators fans roared in approval.       Published 9:25 PM EDT Oct 30, 2018